I woke up around 10 and went into the city to get some coffee. Today would be my last day before my departure back to Holland and I was going to meet with an old and a new friend.

Ryo Shibata is a drummer that did the show in Korea last year as part of Yuichiro’s group. He is a real funny cat and a great drummer. It was great meeting up with him again, we also did my last free day together when i came to Japan the first time.

Also, I had a date to meet an American pianist, Tim Lyddon,  that contacted me true facebook, he was staying and playing in Tokyo. He came to the hotel around 15:00 and we went into the city to get a coffee and exchange ideas about music. Around 18:00 my friend Ryo joined us and we were going to have a bite to eat and check out a session later that evening.

Tim also was joining us and we went to Sjinjuku station, Ryo was going to show me the right gate to Narita airport. This station is one of the biggest in the world so I was very happy that he was going to show me the right way to go. Also, he helped me to buy the right ticket and walked me to the gate to show me where I had to take the train. After being sure I knew my way around the station we took a train to the area where the session would be, it was only 3 stops so we were there in a flash. As it was still a little early we had some food at the cotton club.

The place was not very far from where we had our dinner, and the club, Intro, was super small and really busy. We had to pay a little bit to get in but we got a free drink. It was also the last drink I had to buy because after I played my first tune together with Ryo and Tim the owner, who also played alto sax kept passing me drinks and I kept on playing. 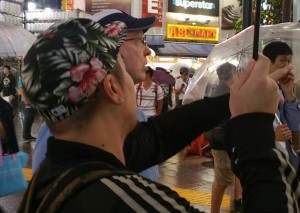 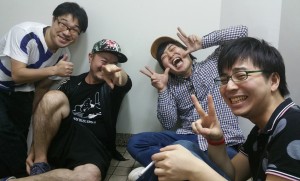 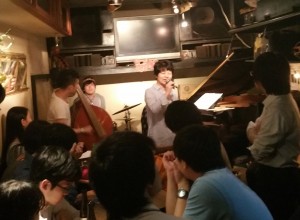 I was really impressed with the level of musicianship and had a great last night out in Tokyo. Around midnight, or maybe a little bit later, I had to leave and start packing my stuff at the hotel Listel. My train was leaving at 7 in the morning so there was not a lot of time left for me in Japan. After saying goodbye to Tim and Ryo I took a taxi back to my hotel and had a small dinner at the 24-7 store close to my hotel. I decided not to risk missing my train so I spent my last night at my room relaxing, smoking and watched a movie on my tablet.