I really like staying at the Daini Fuji hotel. The rooms are big and the people are very friendly. Because I was going to play at Lovely that night the hotel expenses were payed by the owner of the club. This was my third time in Nagoya and I already could find my way around. 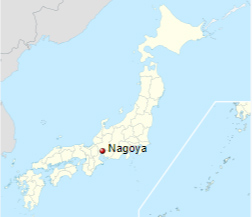 Nagoya (名古屋) is the largest city in the Chūbu region of Japan. It is Japan’s third-largest incorporated city and the fourth-most-populous urban area. It is located on the Pacific coast on central Honshu. It is the capital of Aichi Prefecture and is one of Japan’s major ports along with those of Tokyo, Osaka, Kobe,Yokohama, Chiba, and Kitakyushu.It is also the center of Japan’s third-largest metropolitan region, known as the Chūkyō metropolitan area.

As of 2015, 2.28 million people lived in the city, part of Chūkyō Metropolitan Area’s 10.11 million people. It is also one of the 50 largest urban areas in the world. Nagoya, capital of Japan’s Aichi Prefecture, is a manufacturing and shipping hub in central Honshu.

^ View from my hotel room in Nagoya ^

I woke up really late this morning and

went out to get some food at the 24/7 store across from the hotel. When I got back at the lobby I stumbled into Gaku, he and Shunichi already checked in the hotel and were planning a visit to a famous Korean restaurant. We agreed to meet up around 17:00 to walk to the club together, it was fairly close to the hotel. I really like Nagoya, it feels different to Tokyo, has more space with big roads going true the city in an organized fashion. The weather was still great, hot and sunny but on the news there were already warnings of a typhoon that was on its way to hit Japan and you could feel the tension in the air.

Together with Gaku and Shunichi we walked to the club, it took us about 10 minutes to get there. Jazz Inn Lovely is a beautiful club with a long history and in general it’s not an easy club to get a date there. I was really happy that we got the opportunity again to play there and my tour manager Satoshi did great. Also, this concert was kind of the end of part 1 of this tour. After this gig we would say farewell to Yuuki and Nana because we would travel the next day to Tokyo and play the upcoming 5 shows with the original Tokyo’s Bad Boys album line up.

When we got at the club Nana, Satoshi and Yuuki were already there setting up. We did a short sound check and did some heads and tails of the tunes. This band was already playing the songs comfortable and there was no need for a long rehearsal. 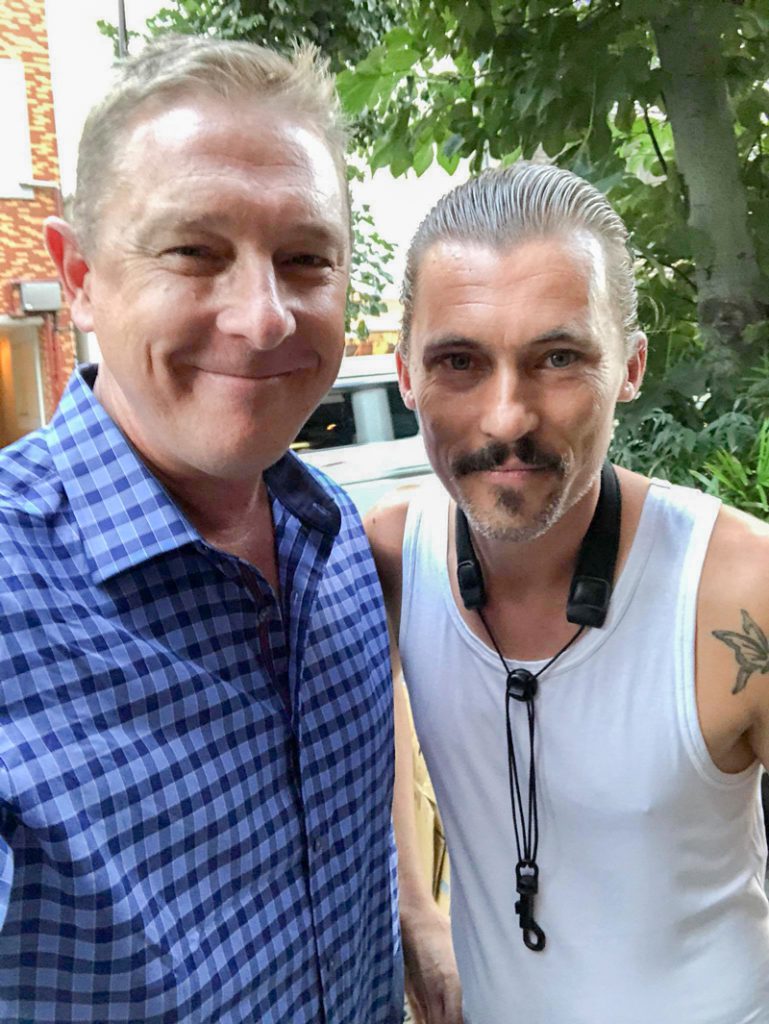 After the rehearsal I went outside and was pleasantly surprised that my friend Dustin Brown was already there. It was so good to see him again. The first time we met I was recording my album Tokyo’s Bad Boys and we were both staying in the same hotel in Tokyo.

Dustin is from Los Angeles, California, USA and goes to Japan on a regular basis. He writes, makes great photos and is a cool guy to hang with. He also wrote a piece about me and my music adventures in Japan that was posted on Hollywood Press Corps, a website he writes for. We kept in contact true the social media highway and this time he was also in Japan so we had made plans before this tour to hook up. He introduced me to his friend Kaoru Sato. She is a big fan of the album Tokyo’s Bad Boys and it was so nice to meet her.It was her first free day in 4 years and wanted to visite one of the shows we did on this tour, how cool is that?

Dustin told me this coming hurricane would be a big one, and was planning to leave Nagoya the next day as soon as possible. Already, the weather was changing and more wind was coming. It would be a challenge to get out in time before the storm would hit Nagoya. Even by Japanese standards this would be one of the biggest ones that was going to hit Japan for a long time.

For me Lovely is what a jazz club should be, close to the people, great sounding room and we went all in. It was great to see that so many people came to see this show. After the show we had some food and drinks and spent some time there. Also pianist Shota was there and we made an appointment to meet up the next day, before I would start my travel to Tokyo.

Check out the photos by Dustin Brown here

I was going to miss both Yuuki and Nana, they had done a great job and made the band sound big and strong. Yuuki proofed not only to be an amazing piano player but also trumpet, a very talented guy. Nana is something special, to play the way she plays right now can only promise big things in the future and I am sure they will both be doing well.

The next 5 shows would be with the original band members from the Tokyo’s Bad Boys album. Together with Gaku and Shinichi I walked back to the hotel and went straight to bed. The next day would be a long day of travel.