This was the day, the day we were going to start recording the new album, Joris Posthumus Group, Tokyo’s Badboys. Satoshi was going to pick me up from the hotel around 9:45, we had to be in NK Sound Tokyo studio around 10:00 and the studio was very close to my hotel.

After loading our stuff from the car we got in the studio, everything was already setup by the crew of the studio.
Al that needed to be done was setting up the drum kit from Gaku and do some sound checking.
This first day was going to be the most important day because this was the only day we had the whole horn section complete.
Yuichiro had to fly to India for a tour the next day and I had arrangements for 4 songs with the 3 horns. 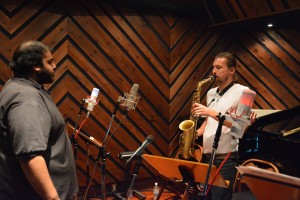 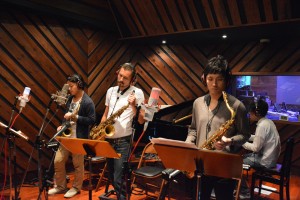 After meeting Neeraj I already felt completely at home. The studio had a nice vibe, warm and friendly. Also, the studio is brand new, Neeraj just opened this studio about a year ago. We had 3 booths, a drum booth, bass booth and a bigger room for the grand piano and the horns together. Neeraj really took the time to listen well to the horn section and set up his mics to get the best sound out of this reed section. Around 12:00 we started recording the first song, Tokyo’s Badboys. 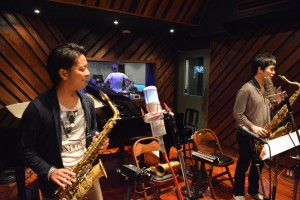 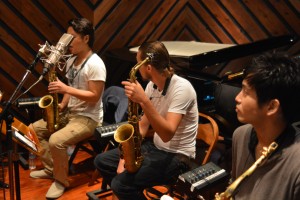 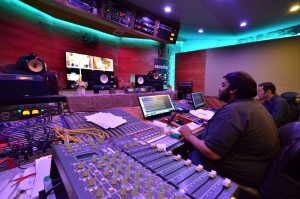 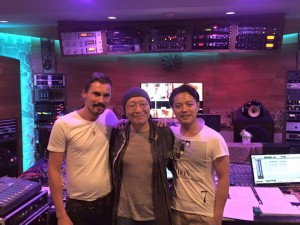 When we were recording the song One Eyed Felix a dear friend came by the studio, Mr Yagi. When Yuichiro and I did the april tour in holland he came by to see the show at Paradox, Tilburg. It was so good to see him again and we even got more energy from his presence. We were on a roll, most of the tunes we did in one take, something I prefer. There is something special with a first take, always. Around 18:00 we took a break, already recorded all the tunes that I wrote for 3 horn section and also a song with me and Yuichiro. We went out to get some fresh air, and some drinks and food at a local Chinese place. But not like the Chinese restaurants I know from Holland, but really good and not expensive.

After this refresh we went back to record a special song, Mr. Amano, Strong Eyed Master. This song I wrote for Mr Amano is a great person, tv producer and musician. I met him on my tour in Japan last year and he is a great friend of Yuichiro and an inspirational man. We made two takes but the first one had the most presence.

Around 20:00 we finished up the first day of recording, did some bounces of the tracks so we could listen to it and Satoshi drove me back to the hotel. There is spent my night listening to the stuff we recorded that day and was very happy with the results. Skype to the family and listening to the tunes the rest of the night. The next day we would start a little later, around 12:00.